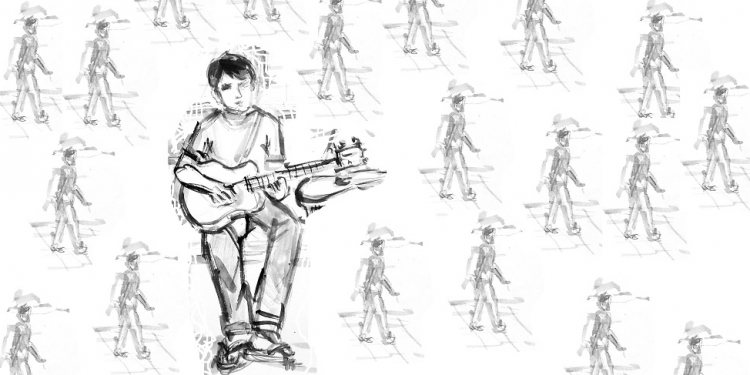 by Ketut Sugiartha
in Fiction

Yuda jumped off the bus that had slowed down before stopping at the road side. With his right hand carrying a guitar he stepped on the sidewalk and ignored the sunlight at five o’clock in the afternoon which was still quite hot. He also ignored the traffic jam and even those who passed him. His oily face could not hide his fatigue after busking all day.

Under one of the mahogany trees lined along the sidewalk he then stopped and sat down. He opened a small black plastic bag he used to collect money. It contained mostly five hundreds and thousands, unlike the previous days which were filled with coins of hundreds.

“Is this a reward for me after thwarting a robbery on the bus?” he asked himself. He didn’t understand how a man could be very rude to others just to make a living. He never thought of doing anything inhumane even though he often ran out of money.

He was the youngest son who grew up in a rich family. He had three siblings and all of them had succeeded. They all graduated from the universities abroad while he seemed to be shunned by luck. He did not know why it was considered wrong to have a simple dream in his life. He wanted to be a musician and hoped to study at an art institute. His father Garda was furious for knowing that. In his opinion being a musician is not a dream but only a compensation of helplessness. He thought his son was unable to understand the importance of the future. He must be guided and directed. Then he made his mind up: Yuda must study at a faculty that can later make him to be a big shot.

Unable to argue, Yuda studied at a Faculty of Economics as his father wanted. However Garda was disappointed. His son not only failed to become a scholar but even became a smuggler. No, not a smuggler of weapons or other prohibited commodities. Something he smuggled was the seed of a baby into the womb of a young woman. In consequence of his carelessness he had to marry the young woman Lilis, even though he did not get blessing of his father.

No doubt his fate changed dramatically. He became a destitute man, living in a simple rented house and supporting his family by working in a shoe factory in Tangerang. It was not enough. When the monetary crisis hit and made the real sector wobbly, like most of his friends he also had his turn to receive severance pay and lost his job.

Yet he had to do something because between the two of them there was their eight-month-old baby, Diti. For the first time in his life he was forced to look into himself if there was anything that could be used to save his family’s ark that would sink.

There was nothing but singing and strumming the guitar. And the only thing he could do was that turned his talent in music into money, but it was not easy to get started because he must fight with himself first. Imagine, a man who used to live in abundance suddenly thrown into the street, doing activities like a beggar jumping from one bus to another to make a living.

Afternoon began to dim. A gentle breeze caressed him who was still busy calculating his income. He was surprised when he was looking at his watch on his left wrist. Not because the day approaching dusk but for the date appeared there. It was 13 of May, his wife birthday.

He rose from his seat. While stepping with the guitar in his right hand he considered what gift should be for his wife. In a state of poverty of course he could not give something special. Actually it could be if he were ready to compromise with himself. Yesterday, his mother secretly gave him a check worth one million rupiah, but the valuable paper was torn and thrown into a trash can. Even though he knew his mother loved him, he didn’t want her to take a pity on him.  He had no right anymore to accept anything from Garda’s family. He was no longer a part of them. He had dicided to accept his life as it was with all its risks.

Again he was surprised to see a supermarket where he often shopped was closed. Several security guards were standing on standby. Movable barbed fences were installed in such a way in front of all entrances. What’s wrong?

The question in his head had not been answered when suddenly a crowd of people emerged from the bend. They shouted slogans criticizing the goverment. They consisted of hundreds of people who carried banners containing writings denouncing their president. They were students from several univercities that could be identified from the jacket they wore. He wanted to join, however,  remembering his wife and baby he moved away from the crowd. He must go home immediately to share something on that special day.

He was relieved when he arrived at a plaza near the bus terminal. When he was going up the stairs to the second floor he thought of his wife.

“Thank you,” he said when his beloved wife served two pieces of white bread that had been sprinkled with peanut butter. “You are really pretty.”

“Still too early to seduce,” Lilis said. “Is your tea not sweet enough?”

“It’s less sweet compared to you.”

“No problem. Look, there is no woman has eyes as yours? And your lips always make me want to go home sooner. You know, you’re as beautiful as the angel I dreamed last night.”

Lilis did not answer. Her face turned glum. Yuda understood what he needed to do. He immediately hugged her and stroked her long black hair.

“Come on, don’t sulk like that,” he said softly. “Do you no longer trust me?”

She immediately slipped her face in her husband’s broad chest. “I’m afraid of losing you,” she whispered.

“Don’t worry, I will never leave you.”

Yuda left his guitar in the luggage storage area and picked up a plastic basket before stepping into the baby food aisle. He took a can of milk for his baby before looking for a gift for his wife but he was confused again. What gift will I give her?

He was stunned for a long time before finally heard noises from downstairs. Like a tidal wave a group of people rushed in and started looting everything. Within minutes the supermarket fell apart like a broken ship. He tried to get away from the hustle and bustle that scared him, however,  the wave of mass that came later blocked his steps.

He was confused after he smelled burning objects and all the doors were closed. The people inside the plaza were trapped and smoke began to fill the stuffy room. Screams of fear and despair began to be heard here and there. While those who succeed escaped the deadly trap could smile leaving the plaza. They brought home their looted goods with hurried steps.

Night had fallen. Lilis restlessy thought of her husband who had not returned. She had prepared nasi uduk. Yes, just it. The food made with rice, coconut milk, bay leaf and lemongrass. It was Yuda’s favourite food.

While she was waiting with excruciating anxiety, suddenly her mother and father appeared at the door. Both of them almost simultaneously asked about her husband. She could only answer by shaking her head.

“Why hasn’t he come home yet? It is your birthday.”

She shook her head again. She flinched when a whimper came from the room and then hurried in. In the room, she found her baby restless in her sleep due to being disturbed by mosquitoes. She tried to kill the mosquitoes by clapping her palms. She killed a mosquito that sprayed fresh blood on her palm.

She was stunned for a moment looking at her baby. There was silence sneaking into her heart when she imagined the possibility that she really didn’t want. She could not imagine what if her husband never return home. “No,” she argued silently. ”It will never happen.” Then she landed a kiss on her baby’s soft cheeks before finally returning to the living room. There she turned on the 14-inch television. News at a glance which then appeared on the screen made her suddenly shiver. Cold sweat ran all over her body. A reporter said that Plaza Ciledug caught  on fire and there were hundreds of looters trapped inside.

Her blood seemed to stop circulating. “Yuda was not there,” she thought with a pale face. “And he’s not a plunderer. He never do that.  He will go home soon.”

She continued to wait until late at night. Even until the day changed. She did not care about the news that many charred corpses found in the plaza. She had no intention of going to the General Hospital of Fatmawati to identify the corpses collected there. She did not think that her husband was among them. 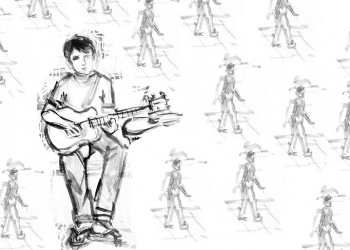 Yuda jumped off the bus that had slowed down before stopping at the road side. With his right hand carrying... 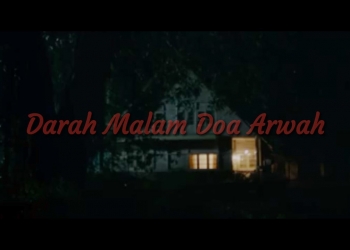 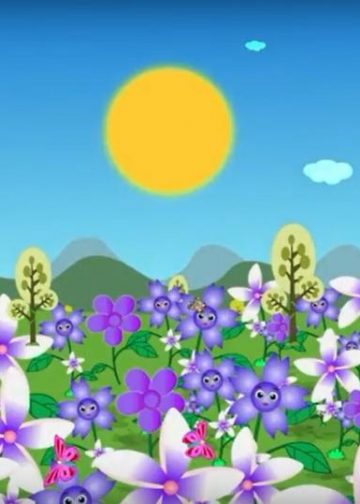 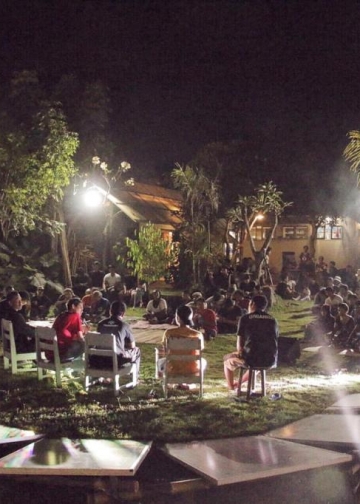 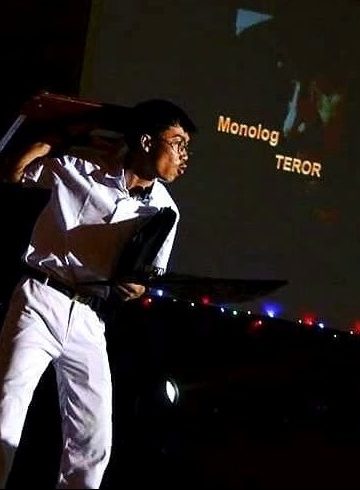 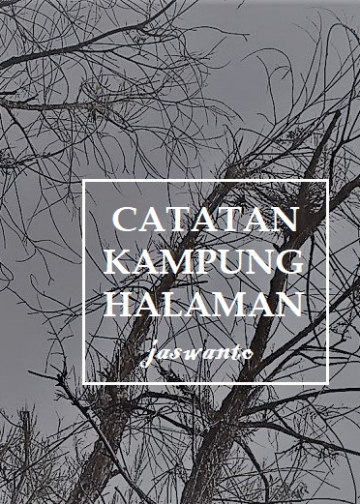 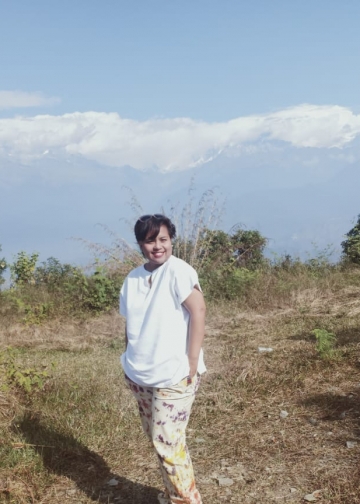 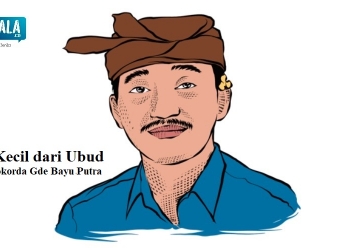 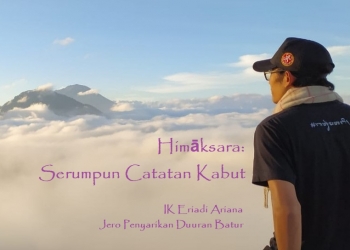